SeaSabre was founded and is owned by experienced boat builder and ocean rower Justin Adkin. 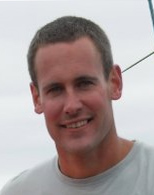 Justin has been a qualified boat builder and engineer since 1999. He served his apprenticeship with Rowsell and Morrison, Exmouth, Devon (racing dinghy designers and builders) from the late 90′s to 2003. During this period, both prototypes of the panelled plywood and the smooth skin GRP classic shaped ocean rowing boats were produced. Fedor Konyukhov went on to smash the solo record at the time for crossing the Atlantic in the first of these GRP hulls.

When Peter ‘Spud’ Rowsell retired in 2003 Justin managed the workshop under his own name Rowsell & Adkin building ocean rowing boats including the world record holding four ‘Queensgate’ and two other of the fastest ocean rowing fours ever to cross the Atlantic from East to West. In 2005/6 he rowed across the Atlantic as skipper of four man crew All Relative, a boat he built, and subsequently went on to win the Atlantic Rowing Race by almost 900 nautical miles.

After a brief rest-bite (7 years!) instructing at the The Boat Building Academy, Lyme Regis, Dorset, Justin founded SeaSabre and manages the workshop in Axminster, Devon, producing various racing rowing and sailing boats. As a side line there’s the maintenance, up keep and sometimes construction of hire boats for Beer beach on the East Devon coast.

Justin rows regularly and partakes in various sporting activities. He is also a former crew member of the RNLI offshore lifeboat in Exmouth, Devon.